As I was surfing for the movies a-coming into our local cinemas, I stumbled upon "Watchmen". The Trailer sure looks interesting enough. The movie is based on yet another comic book, with plenty of superheroes. The setting of the movie is in 1985, during Nixon's still president of the US. The crux of the story is about plot to discredit and murder the various superheroes that exist during the story's setting in an alternate 1985.

The plot summary put up at IMDB read....

"Watchmen" is set in an alternate 1985 America in which costumed superheroes are part of the fabric of everyday society, and the "Doomsday Clock" - which charts the USA's tension with the Soviet Union - is permanently set at five minutes to midnight. When one of his former colleagues is murdered, the washed up but no less determined masked vigilante Rorschach sets out to uncover a plot to kill and discredit all past and present superheroes. As he reconnects with his former crime-fighting legion - a ragtag group of retired superheroes, only one of whom has true powers - Rorschach glimpses a wide-ranging and disturbing conspiracy with links to their shared past and catastrophic consequences for the future. Their mission is to watch over humanity... but who is watching the Watchmen?" 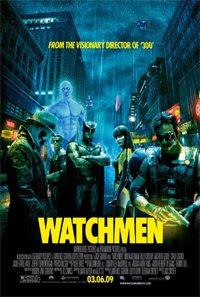 Technorati Tags:movie, watchmen
Generated By Technorati Tag Generator
You can watch the Trailer at the official website of the Watchmen there or below and watch it below to see if it is interesting enough for you :). It is coming to our local theaters from next Thursday onwards I reckon.

I went to read more about the movie at Wikipedia and the more I read, the more interesting the movie looked. There are plenty of characters in the plot with vigilantes and villains abound to satisfy all personal preferences. The superheroes vigilantes include

- Rorschach - Walter Joseph Kovacs, the superhero with the trench coat, fedora and a mask, who continued his vigilante activities after they have been outlawed;

- The Comedian - Edward Morgan Blake, one of the most active vigilante of the group, who is commissioned by the US Government;

- Doctor Manhattan - Dr Jon Osterman, a superhero with genuine powers who is blue in color, and is able to see the future and alter matter all the way down to a subatomic level;

- Ozymandias - Adrian Veidt, "The World's Smartest Man" and a retired superhero who has since made his identity public;

You can read more about these vigilantes' bio at the Watchmen's official website here.

As for the villians, they were not mentioned in the official website but at Wiki's site, they mentioned the following other characters :-

- Moloch the Mystic - Edgar Jacobi - an elderly rehabilitated criminal, know when he was younger as an underworld kingpin and magician;

- Mothman - Byron Lewis - who is not the main focus character but one who appears in flashbacks;

- Dollar Bill - a first generation crimefighter who caught his cape in a revolving door during a bank robbery and was shot to death; and

- The Big Figure - the dwarf crime boss whom Rorschach put in prison.

Perhaps there are no real villains to this story but lets go watch this movie to find out :)

Trailer looks really interesting but a little confusing. Perhaps i never read the comic before. Am looking forward for the show to be on screen~

I've got the comic and it is amazing!!

The movie is going to be a condensed version but am sure it will be just as amazing. ;-)

Can't wait for the movie. Can you believe the types of action movies which came out in February - Chun Li & Dragonball Revolution. Both are really a waste of $$$.